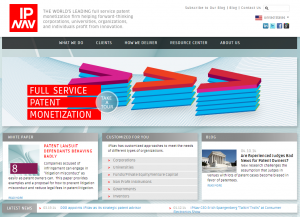 When we started working with IPNav in February of 2012 the company had a legacy website and was in the process of creating a new website.

Tek-Law was hired to provide all of the content for the new website.  After the site was launched we handled all of the company’s corporate communications efforts (including blogs, white papers, press releases, social media, etc.) for two years (until April, 2014), at which time the company took the function in-house.

During that two-year period we took IPNav’s online presence from “one of the pack” to a very strong #2 behind industry leader Intellectual Ventures (IV), a billion-dollar+ company.

We also created widely respected, first rate content.  Note the company is no longer active; we have linked to archived pages.

The work we did with IPNav shows that with the right strategy and investment a smaller company can develop an online presence that rivals that of an industry giant, greatly increasing our client’s visibility and the value of the brand.

Content is anything that adds value to the reader's life.

These days, people want to learn before they buy, be educated instead of pitched.

When creating content, make sure to create your content for real users and readers, not to entice search engines to rank your content better. Stuffing your content with specific keywords with the sole intent of artificially inflating the probability of ranking for specific search terms is in violation of our guidelines and can lead to demotion or even the delisting of your website from our search results.